Thousands of protesters took to the streets Monday outside the Democratic National Convention (DNC) in Philadelphia, Pennsylvania. The majority of them were Sanders supporters opposed to the nomination of Hillary Clinton.

Police preparations for the Democratic Convention have been comparable to those for the Republican convention last week. Philadelphia received a federal grant of $43.3 million and a surge of 3,000 federal agents. Police had erected metal barricades around the convention area, and heavily armed squads were stationed at subway stops and major streets.

In order to avoid the bad publicity of the 2000 RNC in Philadelphia, when 400 people were arrested, the city council has made disorderly conduct a $100 fine instead of an arrestable offense. By Monday evening police had arrested 18 protesters and cited 55 more.

The protests as a whole have been significantly larger than those at the Republican National Convention. While several hundred turned out in Cleveland to oppose the nomination of Donald Trump, thousands of Sanders supporters have come to the first two days of the Philadelphia convention.

Inside the DNC, Sanders delegates booed when Sanders told them to support Hillary Clinton, and a similar mood reigned outside.

Sanders supporters expressed a range of reactions to his endorsement of Clinton. Some hoped it was just a ploy and that he would show his real stance when he spoke at the convention. Others felt betrayed.

Megan, who was wearing a T-Shirt that read “Stop War,” said, “I feel that with Hillary in power we will be in perpetual warfare. [War] is a real profiteering enterprise for her and her supporters, most of them defense contractors, Wall Street guys, Saudi Arabia – who all like war.”

Megan stated that Hillary “would never be my candidate.” 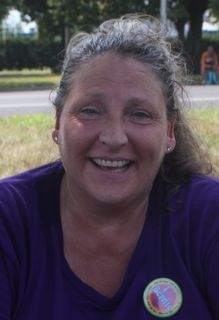 Asked about the leaked DNC emails showing the campaign against Sanders, Megan said that they “proved that there was a lot of collusion and corruption and absolute disdain for Bernie Sanders.” She continued, “They [the Democratic Party heads] don’t want a change in regime, they want to keep the status quo, keep the rich rich, keep the poor poor. No matter what comes out of their mouth that’s what they are going to continue to do.”

Speaking about the Obama administration she said, “I remember hearing hope and change and all that in 2008, but I didn’t see a whole lot of it! Yeah, we got the ACA [Affordable Care Act] passed, but it actually made a lot of people’s insurance rates go up. And I, as a self-employed person, was able to get health care, but I’m paying an astronomical rate, over 500 dollars a month.”

When our reporter asked her about Sanders’ endorsement of Clinton, Megan said, “I’m really just flabbergasted. I am. I think that he feels that if Hillary isn’t elected we will end up with Trump. But, I’m thinking and wondering at this point, ‘Who is worse? Who is more corrupt? The guy who just spouts off whatever he feels, whatever is in that tiny brain of his just comes out? Or the one who is working behind the scenes to screw us? And not really do what they say they do?’

“Where does it end? The rich are getting richer, the middle class is becoming poor, and the poor are dying.” 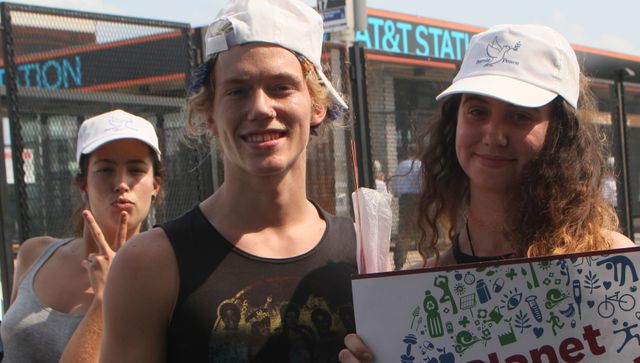 Sierra, on the right, with her friends

Sierra said that Hillary “cares about money and big politics. She is in cahoots with all those bad people.”

Her friend added, “What we need to do is get rid of all those big corporations and [send back] all that money to the people who actually work for it. She [Clinton] tries to preach about all these problems, but she doesn’t live through it and she can’t relate.”

When asked about Sanders’ endorsement of Clinton, he said, “He’s just doing what he is told to do with the hope that we still believe in him.” He added, “I hope that he stands up for himself.”

Liz told the WSWS, “We want to see the DNC change. It’s been undemocratic. We’re not willing to vote for a criminal.” 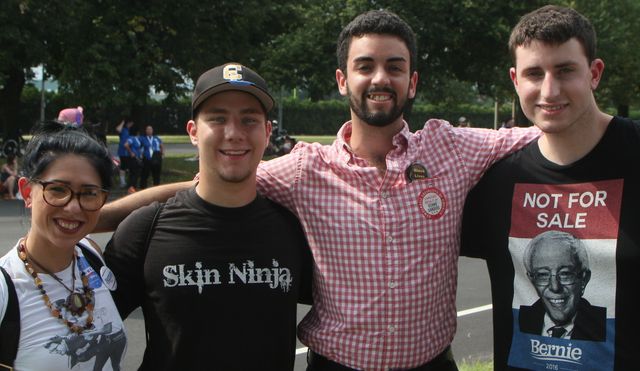 Her friend stated, “It’s bigger than Watergate, but no one is talking about it. It shows a complete lack of empathy from the establishment for people living on the streets for the corrupt system that encourages poverty, that enslaves us in a system of corruption and immorality and prevents us from realizing our potential as a human being.”

The WSWS spoke to an intergenerational family. Trish said, “Hillary is a warmonger. That’s all she cares about. She’s for intervention, and it’s not our business.”

“I vote my conscience, I think Hillary Clinton is for the big banks and corporations, and she is just as bad as Trump. I think a vote for Hillary is a vote for Trump. Trump, he’s destruction. I’m not going to say that she’s not better than Trump. She is better than Trump, but only in a way… I think either way we are screwed, so what’s the point?” She said that she would vote for Jill Stein if Sanders was not placed on the ballot.

When the WSWS reporter spoke to Trish and Roshell he explained the SEP’s opposition to Bernie Sanders and its call to build an independent political party of the working class, the Socialist Equality Party. A trucker, Shannon emphatically joined the conversation, “Yes, Yes. Without us [the working class] they [the ruling class] starve.

“The backbone of America is the workingman,” Shannon stated. The WSWS reporter added that internationally workers were the backbone of society. Shannon replied emphatically, “Yes, yes, we have a shared common interest.”