Locked out workers at the Honeywell Aerospace plant in South Bend, Indiana discussed their struggle with Jerry White, the Socialist Equality Party’s candidate for US president, during his visit to their picket line Saturday. The 317 workers, who produce brakes and wheels for commercial and military aircraft, were locked out May 9 after they voted by a nine-to-one margin to reject the company’s “last, best and final offer.” 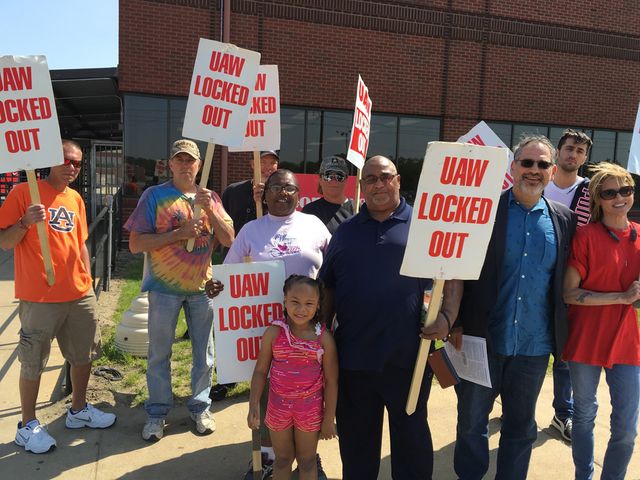 Another 41 workers who produce steel brake pads at a Honeywell plant in Green Island, New York, near Albany, were also locked out. The giant transnational corporation is the world’s largest manufacturer of aerospace engines and components. It is demanding deep concessions, including the imposition of unaffordable out-of-pocket health care costs, while offering wage increases below the rate of inflation.

After workers invited him to sit in their picket shack, White explained that every section of workers—striking telecom workers at Verizon, teachers in Chicago and Detroit and working-class residents opposing the poisoning of water supplies in Flint—were facing the same struggle. Workers had to unite in an industrial and political counter-offensive against the corporations and both big business parties, he argued, urging them to support the SEP election campaign.

Adam, a worker with nearly five years at Honeywell, said, “Corporations are insisting on making more and more every year and taking it from us. Wealth distribution is going to the top 1 percent, and it’s disgusting. Nothing is stopping them because they got the government to back them. Every politician is getting bought off.

“Honeywell says ‘we’re hurting,’ but CEO David Cotes’ pay keeps going up. All the talk about a trickle down capitalism is BS. It’s all theft and corruption.”

Mike, with 10 years at the plant, said, “Every year I’ve been here, we’ve lost major items. In 2003, they put in a $6 an hour across-the-board pay cut for new hires; in 2007, they added a couple more dollars to that and they pay $8-10 an hour for people who hired after 2007 and put them on a substandard health insurance policy and stopped pensions for new hires. In this contract they want to put a $3,000 deductible up front and $8,000 maximum out-of-pocket costs on family health care plans.

“There is a 6 percent raise of over the five years of this contract, with the thousands of dollars in benefits they want to take away, including taking eight paid personal days off. There is no justification for it. In our last contract in 2011, the stock price of the company was $53 and now it is $115. They paid our CEO $33 million for 2015, he cashed in $36 million in stock in February, and he has a fully funded $168 million retirement package. There is nothing wrong with this company—they just tried to take over United Technologies for $90 billion.

“Between 1960 and 1980s, the ratio of CEO pay to worker pay was 30 to one. Today it’s 350 to one. There is no justification for one person to take that much money out of the system. And under capitalism, this guy’s job is to raise the stock prices by any means necessary. The higher he raises the stock prices the more his bonus will be at the end of the day. The money he robs from the employees goes right into the stock price.”

White said the major obstacles to the unification of the working class were the trade unions, which long ago abandoned any defense of workers and had been transformed into business entities. He pointed to the United Auto Workers (UAW), which controls the largest single block of GM shares. The UAW used a combination of intimidation and fraud to push through sellout contracts against a rebellion by GM, Ford and Fiat Chrysler workers last fall. 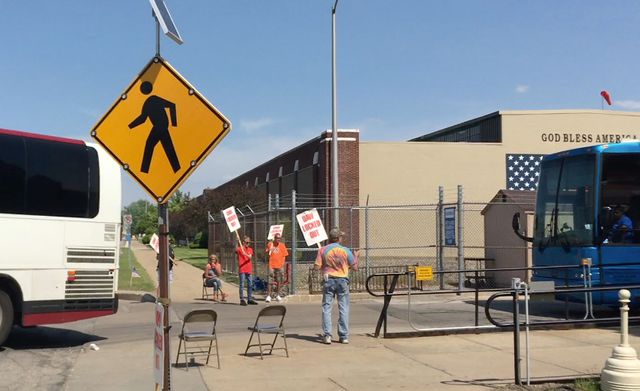 In the case of Honeywell, the UAW forced workers in South Bend and upstate New York to continue laboring after their contract expired on May 3, even as the company openly prepared for a lockout by bringing in hundreds of contractors and potential strikebreakers. Honeywell has hired Strom Engineering, the notorious strikebreaking firm from Minnesota which was used during the six-month lockout of 2,200 steelworkers at Allegheny Technologies (ATI) in Pennsylvania and other states.

Members of UAW Local 9 told the South Bend Tribune that Strom workers were in their plant several weeks before the union’s contract expired to observe how employees did their jobs.

Local union President Adam Stevenson told the South Bend newspaper that the company did not retreat on any of its demands during negotiations last Wednesday. No new talks have been scheduled, Stevenson said, adding that the lockout will “without doubt” continue into June.

The Honeywell plant is on the site of the former Bendix foundry and brakes manufacturing facility. The massive industrial facility, which once employed 10,000 workers, was the location of the first sit-down strike by the UAW in February 1936. The eight-day plant occupation, which was followed by the Flint sit-down strike at GM, led to the recognition of the UAW at the brakes maker.

Allied Corporation (Allied Chemical) purchased Bendix in 1981 and then in 1999 merged with Honeywell International. Today, the sprawling South Bend facility is largely empty, with lots where thousands of workers once parked their vehicles long overgrown with weeds.

Within the South Bend city limits, 45 percent of households are struggling to meet basic necessities, according to the United Way of St. Joseph County, with 28 percent living below the official poverty line. On its web page, Honeywell complains that the workers it has locked out make $7,000 more in annual wages than the average South Bend worker. The company also stated, “Employees can return to work once an agreement is reached”—in other words, when management and the UAW starve workers into submission.

The mood among workers on the picket line, however, was militant and determined, expressing the general radicalization of the working class in the US and internationally. Adam showed White a video on his smartphone about a secret meeting of the American Legislative Exchange Council (ALEC) where Georgia legislators and corporate lobbyists draft laws to protect profits.

“This whole system is rotten,” he said, “and workers are being turned into slaves.”

White said workers needed new organizations of struggle, independent of the unions and both big business parties, to organize a unified struggle to defend the social rights of the working class.

Speaking about the Verizon strike, Mike added, “They are in the same boat as we are—it’s corporate greed. It would be advantageous to us to unite because as long as they keep separating us they are going to win.”